Archways: Placement on Curve or Post
← Electric Wires above Gate Archways without straight side posts → 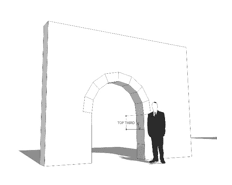 There are two approaches to this problem. Many authorities assert that if the sides rise straight up at least ten tefachim before arching, the area above the beginning of the arch is deemed to be the lintel, and the area below is the post. Accordingly, one measures from the floor to this point and places the mezuzah in the top third of this area.[A]

This opinion holds that one should never place the mezuzah anywhere on the curve as it would be deemed as if one had placed it on the lintel.[1]

However, other authorities rule that the mezuzah is affixed to the top third of the entire doorpost, even if that would mean placing it in the curved area.[B] 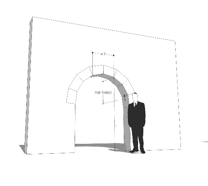 This opinion cautions that if one places the mezuzah on the straight part of the doorpost when it is not within the top third of the entire post, one may not have fulfilled the mitzvah.[2]

Ideally, one should consult one’s local rabbi in this matter as to local custom. If that is not feasible, one may rely on either approach as both are halachically well-based.[3]

[2] Turei Zahav Y.D. 287:2. Kuntres HaMezuzah (287:17) cites several poskim who rule like Turei Zahav, though he holds like the first opinion. As in all arches, the halachic top of the doorway is the point at which the two sides of the arch come within four tefachim of each other.