My kitchen counters form a virtual “doorway.” Is a mezuzah required?
← Ceiling as Lintel Does a garage need a mezuzah, and if so, where? →

My kitchen counters form a virtual “doorway.” Is a mezuzah required?

In our “open plan” apartment, the kitchen has no doorway, per se. Rather, as we walk into it, a kitchen counter mounted on a cabinet is on the right. I was visiting my very religious cousins recently, and I saw that they had a mezuzah on the side of the counter. I have been to many rabbis’ homes, and I have never seen such a thing. Is this actual halachah or just a “chumra” stringency?

From the picture you sent,[A] 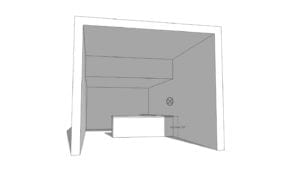 it looks like there is a virtual “lintel” formed by a row of cabinets descending from the ceiling. If there is no lintel above the countertop, it does not require a mezuzah. Maybe that is the case in the rabbis’ homes you have been to.

If a cabinet, at least ten tefachim high, is under a lintel, and it forms the right side of an entrance to a kitchen, a mezuzah should be placed on the top third of the cabinet.[1][B] 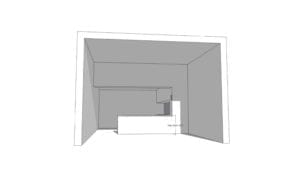 There is room to exempt this opening from a mezuzah altogether, not because it is unfamiliar to see a mezuzah on a counter, but rather because the opening has neither a door nor a left post. However, as I explained in the introduction, it is common practice to put up mezuzot in doubtful cases since mezuzah is a Torah mitzvah. Yes, this may be called a “chumra,” but not “just a chumra.” 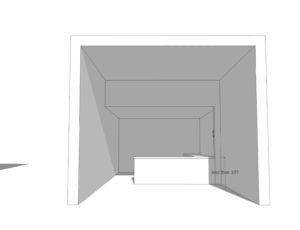